A word of introduction…

During World Creativity & Innovation Week 2018 I had the pleasure of moderating a week-long conversation on imagination with the Google+ Creative Higher Education (#CreativeHE) community. I ended the week with an electronic file overflowing (if such a thing is possible) with intriguing resources and reference on imagination and creativity. Dr. Kevin Byron posted a compelling series of graphics/text about the power of imagination. They resonate strongly with the theory and practice of Imaginative Education. This is the first of a 3-part mini-series entitled The Power of Imagination that shares those posts. I hope you find it informative and inspiring! 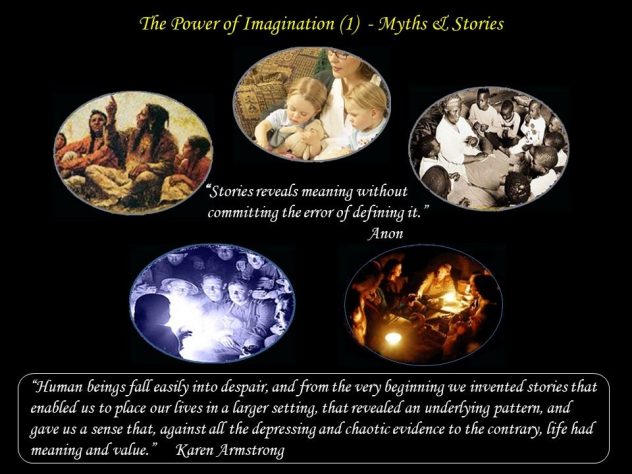 One can easily invent a story from imagination. It could range from an embellishment to a personal anecdote that one has heard, to a full blown flight of fancy based on a day-dream. Life-changing dramas apart, such stories form part of a healthy diet in our daily attention exchange with other people, though they are soon superseded by the next mini-incident or imagined idea. There is however another order of stories in circulation that have stood the test of time, sometimes originating many hundreds of years earlier, and that appear around the world in numerous forms having been adapted locally by various cultures. Generally known as traditional tales, these stories often have a social element to them, but they are more than mere inventions of the imagination, because they also carry with them a significance that can resonate deeper within our minds. Such stories created by the wise require one to search them out.

The social element of traditional tales fulfils the various functions illustrated in the slide above. This includes providing an early education, sustaining the mores of a culture or tribe, providing entertainment, and enabling groups of people to bond at times of trouble.

This social dimension in a traditional tale is the means of transport for the deeper meaning that somehow by-passes our analytical, literally interpretive mind. To quote from the writer Idries Shah in his book ‘World Tales’ (1): “Perhaps above all the tale fulfils the function not of escape, but of hope. The suspending of ordinary constraints helps people to reclaim optimism, and to fuel the imagination with energy for the attainment of goals: whether moral or material.” 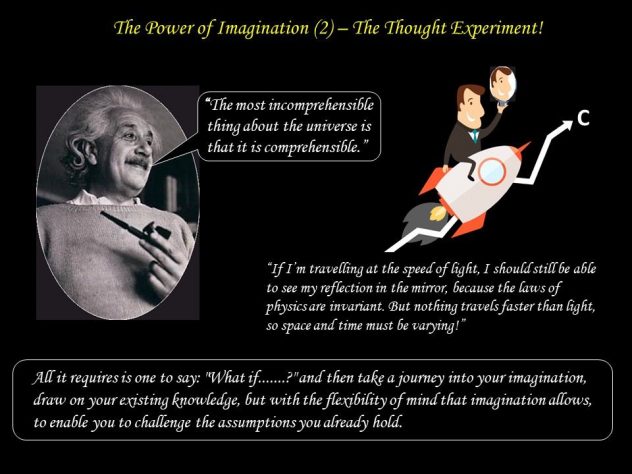 The Thought Experiment: The Imaginative Laboratory in your Head

A thought experiment enables one to solve problems conceptually without recourse (initially) to an experiment. This technique was first described by the Greeks with their reliance on deduction from a set of premises to solve mathematical problems. Many great scientists have invented their own thought experiments to test and make sense of abstract concepts, prior to their verification by a real experiment. Examples in physics include Shrodinger’s Cat and Maxwell’s Demon, and other disciplines such as philosophy and law draw on this technique occasionally.

One of Einstein’s thought experiments that helped him to develop the theory of special relativity is illustrated below. Here he was wondering what would happen to his image in a mirror if he was travelling at the speed of light. According to classical Newtonian physics, the light from Einstein’s face would travel at his rocket speed plus the speed of light, and be reflected off the mirror so that Einstein would still see himself. However he had already postulated that nothing could travel faster than light, so in theory his image would disappear, because the light would never reach the mirror. But according to his theory what would happen if he travelled very close to the speed of light? Would his image form very slowly as the light took longer to reach the mirror? This did not make sense, given that the laws of physics are supposed to be invariant. Einstein resolved this dilemma by suggesting that the speed of light always remained constant, and instead it was time and distance (space) that varied with speed.

This idea turned Classical theory upside down, and counter-intuitive as it seemed, it was correct and later verified experimentally. Interestingly, like all good scientific progress the earlier Newtonian physics didn’t turn out to be wrong, but was a specific case of Einstein’s relativity in which the speeds involved are slower than the speed of light. So we live in a Newtonian world, but whenever you use your Sat Nav you enter Einstein’s world because a small timing correction, due to relativistic time dilation, needs to be made due to the high altitude and speed of the orbiting satellites. Einstein developed this famous theory of special relativity in the earlier 1900’s along with four other great ideas that changed the world of physics.

Thought experiments are a great way to teach, and indeed to develop ourselves. All it requires is one to say: “What if…….?” and then take a journey into your imagination, draw on your existing knowledge, but with a flexibility of mind that imagination allows, to enable you to challenge the assumptions you already hold.