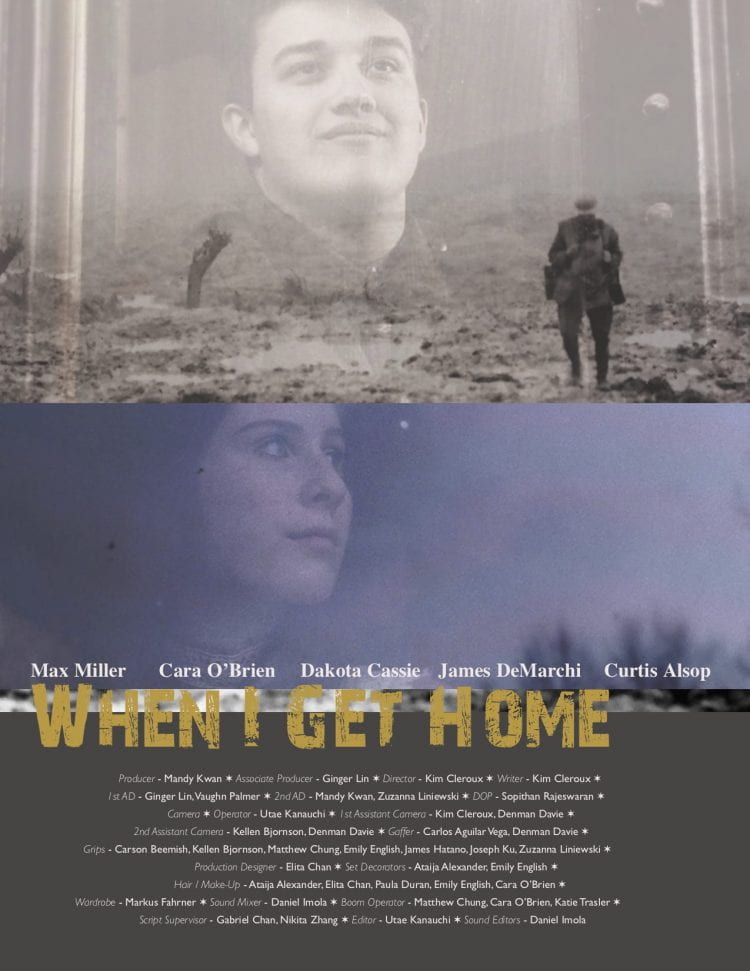 [This is Part Two–be sure to read Part One of this exciting project.]

The WWI Film project in the trench was itself was a bit of a leap of faith for me. To have the ‘spark’ of an idea and then let students run with it was a bit scary as the teacher.  One thing I have learned over the years is to let go of some of my ‘teacher control’ and see where the students will end up. I learned through my Learning in Depth work years ago to give more and more opportunities to students and realize that it’s okay to have some classes where not a lot of ‘assigned teacher or seat work’ is completed.

I gave myself permission to allow my students to take more control over the direction of their learning on projects (read Dive Into Inquiry by Trevor Mackenzie for a great intro to this). However this film project had a lot more riding on it and when I felt my teacher control was beginning to resurface, I re-read a section of Mackenzie’s book and decided to let the student’s swim in the deep end and do their own free inquiry and take full ownership of this project. That isn’t to say that there weren’t struggles, or battles, along the way during this project. As any teacher knows, students need guidance.

Guiding them to historically accurate information, props, music choices, and letters written home from the trenches was the easy part for the history teacher in me. Sources are abundant. The battles we encountered were things in the background behind the scenes, the things that the students themselves had to work out collaboratively as a crew and cast: editing, special effects, music, lighting, craft services, etc. The students had to work through this and with support from Phil Byrne their Ace-It teacher, Markus Fahrner the Curator of the Port Moody Museum, and myself, they had to figure these issues out and solve them.

Another battle the students encountered was keeping up with their regular schoolwork. All of the students involved in this project missed a great deal of class time to make this project happen. The amount of work these students all put into this film project was impressive by professional film standards, but putting in that time meant cutting corners for some things and for some students that meant missing classes during film days. Tests and presentations were rescheduled. Students had class lessons that they had to make up on their own time, extracurricular activities to attend to, and ongoing work schedules after school. However, as hard this was for them, no one complained and they always arrived to set on time and gave their all.

They knew deep down that this was a once in a lifetime opportunity and the timing was perfect with the 100-year armistice that very month.

The last battle came in March when the students doing the editing, sound, and final cuts knew they had less than a month to complete the film, resulting in about 8 students spending part of their spring break at the museum re-recording sounds, cutting and editing final scenes, and putting in the final credits.

I had a moment of panic… Perhaps I should have had more control over the project?

It was crunch time and I was starting to worry it wouldn’t be done for the April deadline as we promised the Port Moody Heritage Society. You never know the outcome of a battle until it’s over so I let them continue to do their own thing with hopes that they would finish on time and be accountable for what they signed up to do. They did.

The ‘Armistice and Peace’

The students knew from the first day of the project that the film had to be completed for the premiere we set with the Port Moody Station Museum: April 7th, 2019. I had worked with Markus and the staff at the museum and organized a premiere showing for the film. We had keynote speakers, community guests, students (cast and all crew) with their families, displays of WWI artifacts set up, district guests and teaching staff, even my good friend Laurie who is the producer of the TV show Border Security showed up to give her support. With a huge support system, my students were beaming; they had all taken ownership of this project and felt proud in being part of it.

But for me it was the last stand. The night before the premiere the students were still cutting and editing. They weren’t sure it was ‘perfect’ and wanted to make last minute changes. There was panic about how to share it, who should have access to it, whether the sound would run smoothly if played on the museum speakers, whether it would stream properly or whether it should it be downloaded, and their final question to me…

The next afternoon at the premiere, their film When I Get Home debuted. It received a standing ovation, accolades from Laurie the TV Producer and all members of the audience, and the suggestion that it be entered into the Film Festival Series for short films this summer and fall. It is currently entered into a couple of Film Festivals and it was used as an entrance demonstration for students going into this industry in post-secondary.

With the credits rolling and the film coming to an end, we realized that it was over. They had accomplished their task of creating an accurate WWI short film, learned more about WWI than any textbook could have taught them along the way. They were giving tours to their friends and families of the trench and explaining what trench life was like 100 years ago. To see these students giving tours of the trench to family and audience members and detailing accurate information about life on the front line of WWI from Passchendaele to Vimy was the moment I knew it had worked.