This question was the foundation of my action research project. Adults might answer that imagination is forming new ideas or concepts in the mind.

But I didn’t ask this question to adults, I asked kindergarten students. Teachers that work with kindergarteners will tell you that these students are experts on imagination.

The first student I asked told me that imagination is a dinosaur. It was a lovely image, but I had no idea what it meant until she explained.

“Imagination,” she said. “Is big and strong and very old. You can do anything you want with imagination.”

“So you can imagine that you are a dinosaur?”

As I interviewed more students, I began to see that many five year olds associated imagination with a concrete image or feeling. Many of them answered that imagination was flying or daydreaming…or imagining that you had a superpower.

But to one five-year-old, imagination was a scary thing. He explained that having the ability to imagine something can be frightening because you could do anything you wanted in your mind. The idea of imagination as a vast pool of endless possibilities was an intimidating thought.

The little boy’s response helped me narrow the focus of my action research further. What began as the open-ended inquiry of what imagination was evolved into examining how we might assess or document imagination.

If imagination could be anything or even a combination of many things, then how did I — as an educator — fairly assess my students ability to think creatively? What would be the best way to report on imagination? How could I share this information with parents in a way that they could see the development of their child’s mind?

I began to wonder if it was even possible to answer any of these questions during my week-long field study. And the answer, of course, was no…there was no possibility of answering these questions, but I could start exploring them. 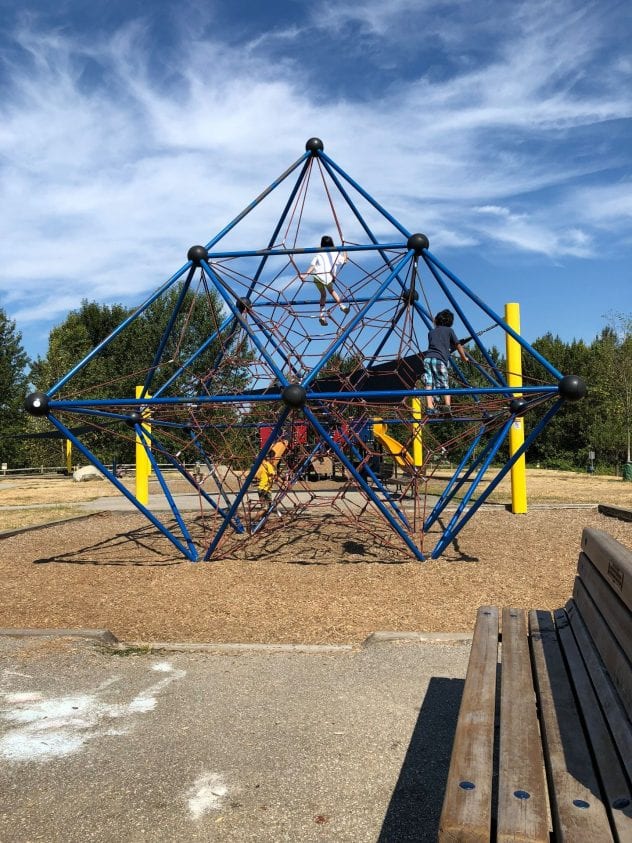 Over the course of the week, I surveyed students, spoke to the teacher, incorporated tools of Imaginative Education into lessons that I designed for the homeroom teacher, and observed student interactions. But, the most enlightening conversations occurred during snack time.  As students carried on their conversations, unbothered by the teachers that might be eavesdropping, I saw imagination at work.

I learned that student dialogue was twenty percent fact and eighty percent fabrication. Kindergarteners are master storytellers. Their minds do not dwell on the details of w
hat is plausible in reality or the laws of physics. The kindergarten imagination is a dinosaur that clobbers over details that would otherwise limit the mind of an adult. It is a dinosaur that devours fact and replaces it with creative flair.

And that was when I learned the there was no best way to document imagination…there were many ways. If imagination meant different things to different students, then it should also be documented in different ways. For example, students might be given the opportunity to go outside and explore the natural world during Science and while there, they might invent a game using the natural elements that surround them. They would engage their bodies (somatic understanding) and in turn, engage their imagination. They might also share oral stories during reading time. Instead of reading a story, students can invent one in small groups or as a class.

The more I observed, the more I learned that kindergarteners already knew the best ways to demonstrate their imaginative capacity. However, as an educator, I needed to provide my students with the opportunities to share that imaginative capability with peers, parents and guardians, and other teachers.

And because I learned all of this through observation, I knew that others could too. Students needed to be provided with the opportunity to be leaders that can take ownership of their learning. Students can engage in self- or peer-assessment, keep a portfolio of their learning, and hold a student-led conference.

All these ideas seemed simple enough; I’m sure many kindergarten teachers employ some or even all of them already. But the idea of letting kindergarteners guide their own learning can be daunting — especially in regards to curriculum and content. With a mandated curriculum and timeframe, it becomes difficult to allow students time to showcase their imaginations. Time becomes a limited and precious resource, and often educators find themselves walking the tightrope between teaching content and engaging imagination. However, if educators can document imagination, then it becomes another tool to assess student learning and teachers would have the possibility to teach content through imagination.