Welcome back to this 3-part mini series entitled The Power of Imagination by Dr. Kevin Byron. In Part I, Kevin describes the connections between imagination and Myths, Stories, & Thought Experiments. In this post he discusses abstraction, analogy, and metaphor.  Enjoy! 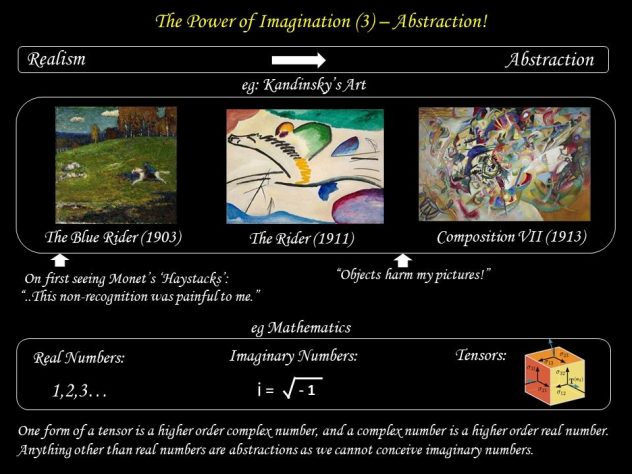 Abstraction concerns the mind’s extraordinary ability to think about ideas, principles and things that have no spatial or temporal presence. For example we can arrive at the abstract concept of ‘roundness’ through seeing different instances of roundness such as a football, the moon etc. The abstract can take on many forms, and two different examples are illustrated below.

Kandinsky is a good example of an artist who pioneered abstract art (the use of shapes, colours and forms to express feelings, thoughts and ideas) and transitioned his work from the figurative to the abstract in just a few years. When he first viewed Monet’s Impressionist painting ‘Haystacks’ he said: “That it was a haystack the catalogue informed me. I could not recognize it. This non-recognition was painful to me.” However he had an epiphany after seeing one of his own figurative works that had been accidently turned on its side. Later on as he began exploring abstract art he said: “Objects hurt my pictures!”

The second example illustrates abstraction in mathematics with the introduction of other dimensions to numbers. Even though ‘numbers’ is an abstraction from a specific number, we have a more concrete sense of real numbers, whereas the idea of the square root of minus one makes no physical sense to us. A complex number has both a real and an imaginary component, and is an indispensable tool of analysis in many branches of science and engineering. It can be visualised as a two-dimensional graph, but the nature of ‘i’ is completely at odds with our understanding of numbers. Tensors appear in many forms but in the description depicted here they represent higher dimensional numbers. So a tensor is a higher dimensional complex number, and a complex number is a higher dimensional real number. We live in a 4 dimensional world (ie 3 spatial dimensions and one temporal one), and it’s impossible to visualise anything higher, yet quantum theory involves many dimensions in its theoretical formulation. The theory has produced some very abstract ideas such as an infinite number of universes, negative time and temperature and teleportation. At an applied level quantum mechanics is one of the most understood, precise areas of science that has resulted in a huge diversity of technologies.

Understanding where the real ends and the abstract begins (or for that matter the imagination) is a challenge, because everything we experience is a construction in our mind, and the real tends to be based on a consensus. (Here is a post from the Tips For Imaginative Educators Series about this cognitive tool.) 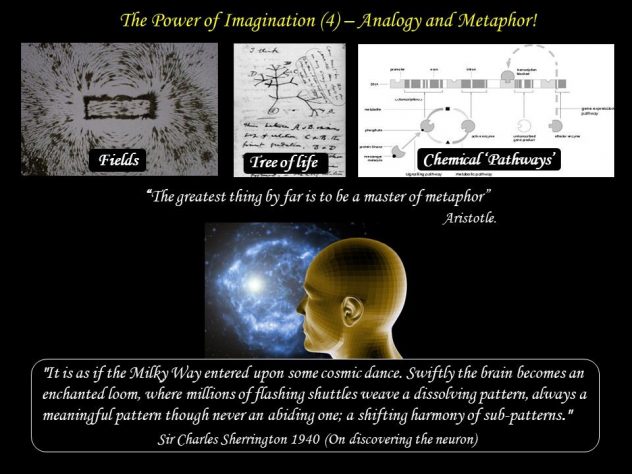 Whilst analogy and metaphor are a powerful means of communication in all disciplines, I will focus here on my understanding of their application in the sciences and engineering.

Analogy is an indispensable tool for enabling a better understanding of concepts, mechanisms and phenomena at all levels of education. Indeed analogy is written into the everyday use of the language of the scientific disciplines with terms like ‘field’, ’tree’, ‘wave’, ‘flow’, ‘bond’ etc borrowed from other common-place technical, and non-technical contexts, to provide a more concrete understanding of abstract ideas. Beyond such terminology, complete descriptions of common knowledge can illuminate scientific ideas that are difficult for non-specialists to visualise. Analogies can also guide the non-specialist away from constructed notions of ideas that are incorrect, thereby helping in structuring a better understanding.

Analogies have been shown to improve the conceptual understanding of scientific ideas by helping in the transition of concrete thinking to formal (abstract) thinking. For example Sarantopolous and Tsaparlis (1) showed that concrete thinkers studying chemistry – in which teaching the conventional curriculum also included analogies – performed twice as well in examinations compared with control groups for whom the analogies were excluded. Whilst educational theory based on studies by Piaget shows that most people develop the skills of abstract thinking before they reach the age of ten, when confronted in later life with ideas for which they do not have the background understanding, they revert back to concrete thinking, and construct ideas that may be incorrect. A good analogy which draws on shared common knowledge provides a corrective to this and enables a better understanding of the ideas presented.

In the UK, the research councils’ Impact agenda includes ‘public engagement’ as one of the activities that can be undertaken by university researchers, in order to extend the reach of their research beyond the academic community. The skills of public engagement are a valuable asset in a researchers’ career, though these skills are not directly transferable from the kind of presentations skills that work well with academic audiences. Given that researchers in many areas of science are working with ideas that would be considered abstract to the general public, it’s important to find ways of communicating these ideas more effectively. Analogies help greatly in this respect, because they arise out of inspired connections between two disparate areas of thought – the topic itself (the Target domain), and the more widely understood area from which analogies are sought (the Base domain).

For example pulses of LASER light that are spreading due to temporal dispersion down an optical fibre can be envisaged analogically as sprinters of different running abilities on a race track where each sprinter represents a different wavelength. At the start of the race they are all bunched together, but as the race proceeds they start to spread out representing dispersion (ie pulse spreading) down the fibre. If the base domain includes a human element there is a great chance the concept will be understood by everyone.

One issue with analogies though is that they are limited, and if pressed too far they fall apart, and are unable to explain things at a deeper level.  For example it is useful in instructing younger people how electricity flows down wires to initially view it as water flowing down a hose pipe. You can even extend this to rate of flow representing current, the water pressure representing voltage, and the shape and surface condition of the hosepipe representing resistance. However when you are required to explain how actual electrons flow down a wire, the analogy breaks down completely because they don’t flow smoothly, and it can take an unexpectedly long time (based on the water-pipe analogy) before an electron arrives at the other end of the wire. A better analogy here would be a pinball machine. The ball (electron) is projected by the energy in the electric field and then immediately collides with a much bigger atom. It stops at that point and may even go backwards, and then the field accelerates it forward again until it hits another atom and so on. After a rather long random walk it arrives at the other end. The important skill is in knowing when to apply which model, and there is rarely a smooth interface between them. If we were however to speak factually about electricity we need to drop these models, and resort to hard science often underpinned by mathematics, and in this case building a circuit that works wouldn’t be helped greatly by drawing on analogies. Analogies then should be viewed as a bridge to conceptual understanding, not a permanent structure. A closer scrutiny of some everyday terms that analogically describe scientific phenomena are actually flawed at the outset. For example the Big Bang wasn’t big, and it didn’t bang, and a black hole isn’t a hole, it’s a very densely packed region of mass.

In the early 1990’s there was a lot of publicity about efforts at the CERN laboratory in Geneva to find experimental evidence of a fundamental particle that been predicted much earlier, but had eluded efforts to find it. The particle was called the Higgs Boson, and in 1993 William Waldegrave, the then UK Science Minister offered a prize in an open competition for anyone to come up with a simple analogical explanation of this particle. The winner of the prize was Prof David J. Miller at University College London and his analogy goes as follows:

“Imagine a cocktail party of political party workers who are uniformly distributed across the floor, all talking to their nearest neighbours. The ex-Prime-Minister enters and crosses the room. All of the workers in her neighbourhood are strongly attracted to her and cluster round her. As she moves she attracts the people she comes close to, while the ones she has left return to their even spacing. Because of the knot of people always clustered around her she acquires a greater mass than normal, that is, she has  more momentum for the same speed of movement across the room. Once moving she is harder to stop, and once stopped she is harder to get moving again because the clustering process has to be restarted. In three dimensions, and with the complications of relativity, this is the Higgs Boson”

A technique that I have used to help researchers develop analogies for their abstract ideas is ‘Analogical Brainstorming’ which I’ll describe at another time.