Welcome to Part 3 in this mini-series on the Power of Imagination by Dr. Kevin Byron.  (Part One: Myths, Stories, & Thought Experiments ; Part Two: Abstractions, Analogy, Metaphor) Enjoy! Please leave a comment to continue the conversation. 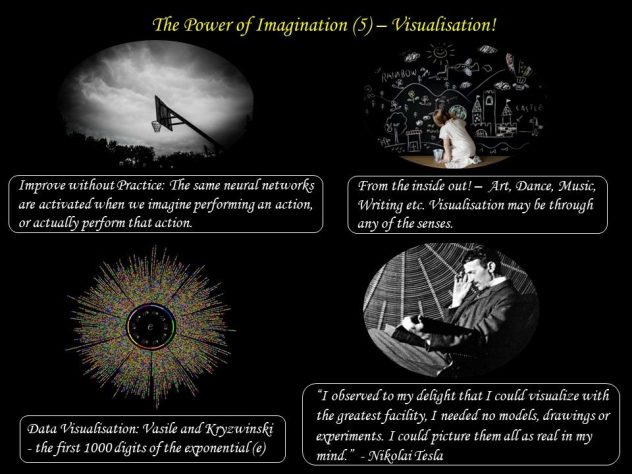 The boundary between our real and imaginary world has become more and more indistinct recently with developments in ‘virtual reality’, and research by neuro-scientists has shown that we can experience real-world and imaginary actions in similar ways. A great deal of research in this respect has been carried out on performance in sport, and it has been shown that the same neural networks are activated when we imagine performing an action, or actually perform that action. In an experiment carried out many years ago with basketball teams of the same ability, one team was invited to continue practising for twenty days, another team was invited to attend the basketball court, but they were not supplied with a ball, and instead simply visualised themselves playing. A third team were asked not to practice or visualise at all, and after twenty days the three teams played each other in a number of games. The practising and visualising teams had both improved their performance by over 20% (based on average scores) compared with the non-practising teams. Deliberately applying visualisation in sport, and indeed in restoring one’s health after an injury, has been verified as a real effect, and the book ‘Better golf without practice’ by Alex Morrison is an example of several publications on this subject.

The second image in the slide hardly needs stating. Drawing and painting is one way in which we externally represent what we see and experience in ‘The Mind’s Eye’. Visualising is not just confined to one sense however, and we can transcribe anything we experience with any of our senses and indeed combinations of them, into the real world with music, dance, writing etc. Again, the active practise of visualisation can enhance performance in many of these activities. Visualising success coupled to exercises to slow down our breathing when we are anxious, are very effective in preparing for an interview, presentation etc.

The third image is an example of the rapidly growing field of data visualisation. The first examples of this were probably maps, and basic star maps were identified on the walls of the caves of Lascaux. The image shown below is a visualisation by Christian Ilies Vasile and Martin Kryzwinski of the first 1000 digits of the exponential function (e). Data visualisation is a creative combination of statistics and mathematics with graphic art, and simple exercises can be devised using physical objects to help students visualise numbers.

The fourth image shows the engineering genius Nikolai Tesla and he is an example of a number of scientists who have discussed visualisation as a tool that they have applied in clarifying scientific and engineering challenges. There is some overlap here with other tools of the imagination such as the use of analogy and ‘the thought experiment’. Tesla had an unusually powerful imagination, and it was alleged that he could visualise the design of complex electrical engines before even beginning to construct them. To quote from him:  “I observed to my delight that I could visualize with the greatest facility,…………I needed no models, drawings or experiments. I could picture them all as real in my mind.” 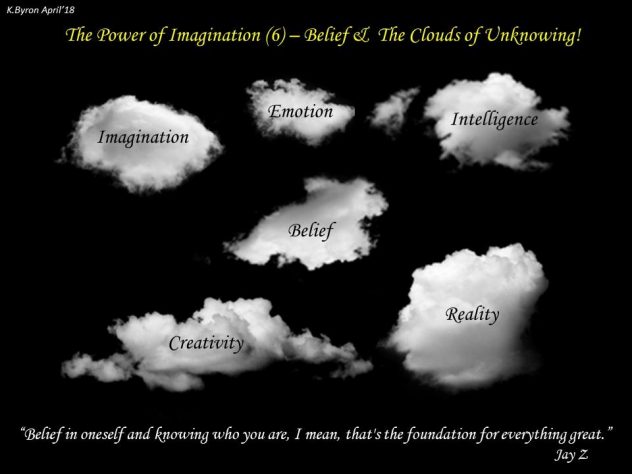 There is an on-going debate in philosophy concerning the differences and similarities between intelligence, belief, creativity and imagination. Some see overlaps between two or three of these things, and others try to integrate or separate them all.  Similarly the role of emotion in all these cognitions is somewhat cloudy and lacking evidence, and by definition, given that there are very few absolutes in life, our idea of reality is also constantly changing shape.

Neuroscientists prefer to talk in terms of neural networks such as the Executive Attention network, the Default Mode network, and the Salience network, and some progress has been made in identifying their roles with regard to the aforementioned terms. A great deal of questions remain unanswered however, for instance there is no understanding of what consciousness is, and recent research has suggested that the unconscious is an illusion.

Beliefs are inventions of the imagination designed to give some secure footing to these and other imponderables in life. Many of our own beliefs have come from the imagination of others, not our own, and were devised thousands of years ago. If they don’t touch our imagination, they represent little more than conditioned thought and action in our daily lives. For example we don’t need to think about whether or not the sun will rise tomorrow, even though one day it won’t.

In the 11th century St Anselm of Canterbury developed a number of proofs to justify a belief in God. One which follows a logical line suggests that if one believes it is possible to conceive something that is greater than the greatest thing that can be conceived, then that inconceivable thing must be God. No-one escapes belief though, because if we believe that it is not possible to conceive such a thing, then that itself remains a belief nevertheless.

In spite of the organic, ever-changing shape of the ideas we discuss here, and the fact that we can’t be secure in really knowing what we are talking about – given the lack of real understanding on these matters by specialists – it’s important to try.

It’s worth noting that this was not just Global Creativity week, but also Global Innovation week too. In my view innovation starts with communication, irrespective of how clear the ideas are that we are trying to articulate. Innovation is about having a go, even if we fail. More importantly learning is not so much about holding knowledge or facts that are secure  – the ‘What’ of knowledge – but more about the ‘How’ – ie how can I do something with this in order to learn, create more and stimulate my imagination further. Even if we can’t clear the clouds, we can still enjoy the sun that shines between them.