My search for work addressing “imagination” and “educational leadership” resulted in few hits. This lack of research doesn’t mean there aren’t any imaginative leaders out there—I know there are. It also doesn’t mean there isn’t any research on imagination in leadership–there is some (e.g. work on the Moral Imagination by Odom et al. 2015; Werhane, P.H. 1999). It does suggest, however, that we (educators, leaders, researchers) aren’t working together to fully conceptualize imagination in the context of leadership or to identify practices that can strengthen leadership imagination.  We aren’t working together to create, nurture and expand educational contexts in which we value imagination. We aren’t working to create practices that grow imagination in schools (teachers/students). Rather than working in (and creating) what if learning cultures that support and empower teachers and students to envision and enact possibilities, many of us work in contexts that discourage (dare I say punish) imagination.

Gillian, at some point you have to stop reading and start writing.

So, as dozens of books and articles cover my actual and virtual desktop; I realize it’s time to bring it all together. My goal this year is to write the story on imagination in educational leadership literature. (aka: do a literature review. But isn’t the story a much more engaging way to think of it? And won’t you, as reader, be more engaged in the story?) 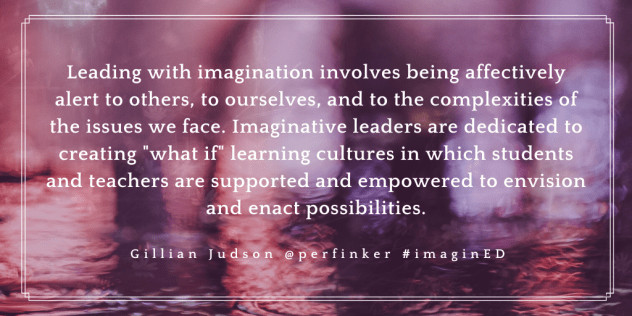 Based on my ongoing work with teachers and leaders, reading and writing, and leading within different educational contexts K-post-secondary, I suspect that the reason we see imagination so little in educational leadership is that it continues to be misunderstood. Based on misunderstanding (typically that imagination is make-believe, for children, and “just ideas”) we don’t notice its active role in our daily lives, and we don’t seek to understand its impact in our history or on our future. And, as a result, we underestimate its value. We seem to revere imagination as a desired capacity in someone else and also fear it for ourselves. Being imaginative—proposing something different or what “is not yet”—is risky; it makes us vulnerable. And so, we may leave imagination out of our leadership practices and identify-formation. As far as I can tell, the power of imagination for educational leadership has yet to be unleashed on a broad scale.

This is where I’m starting; stay tuned to find out where I end up.

Spotlight on an Imaginative Leader

A massive perk of my role as an imagination accomplice is that I get to work with extraordinary educators and leaders. Long-time educational leader, educator and CIRCE advisory board member Karen Steffensen (@kstef2) is an imagination accomplice whose work stands out in the field; it gives me hope and inspires me as I start this project. Steffensen’s research entitled “Optimizing Innovation in Praxis: Imagined Possibilities and New Realities – Exploring Narratives of Educational Transformation” (2012) is remarkable—not only for its content but because it is one of few works I have found that centrally looks at imagination in leadership in both theory and in practice. Moreover, Steffensen employs multiple cognitive tools in the writing that make her research meaningful and memorable. Faced with ongoing challenges and, often times, the stifling effects of the “status quo”, Steffensen’s research indicates how effective leaders play multiple roles that require them to know themselves, to envision possibilities, relate and empathize, grow and change. Imagination is at the heart of her vision for educational leadership that transforms individuals and organizations. 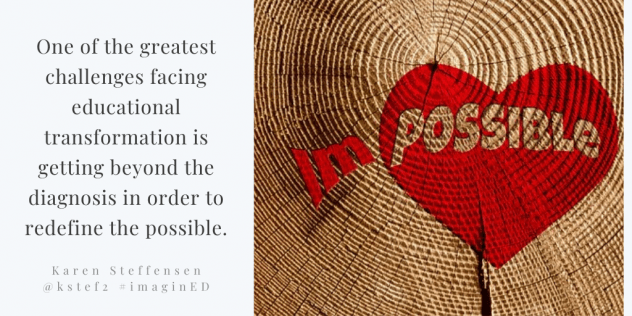 She argues that the “not yet” is the responsibility of leaders. None of this work is possible without imagination. Her narrative inquiry is personal and powerful with stories, metaphor, and mental images that will stay with you. It will show you what is possible for research and leadership and will also give you a sense of just how important imagination is for effective leadership and for creating educational cultures that empower all learners.

[Read more about cognitive tools and leadership on the Imaginative Educational Leadership page. Hear from me and from Courtney Robertson (@WonderAndEd), Imaginative Leader and Educator in the Langley, B.C.]

Calling all my colleagues—if you know of any work that is about imagination in educational leadership (explicitly or implicitly) please get in touch.

I don’t want to miss a thing.

2 thoughts on “What’s The Story on Imagination in Educational Leadership?”