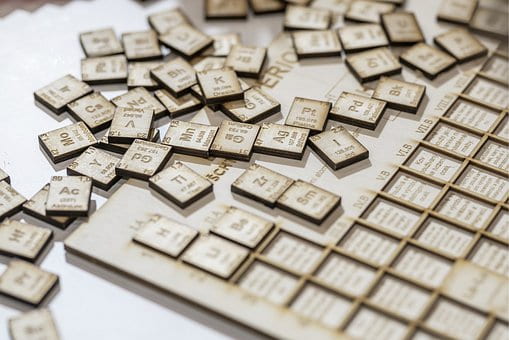 I read a great deal when I was growing up. I read in my backyard, in bed, at meals, on trains, while walking home from school. I read Jane Austen, Arthur Conan Doyle, Agatha Christie, Elizabeth Gaskell, and James Herriott. I read short stories, magazines, poetry, novels. I read widely, voraciously, and acquired a particular taste for science fiction. Probably because of this, when I imagined my future, I dreamed of being an astronaut, or, failing that, a scientist or mathematician.

If you had told me that, four decades later, I would be invited to contribute an essay to Chemical & Engineering News to mark the hundred and fiftieth anniversary of the periodic table, I’d have guessed that I must have grown up to be a scientist. I might even have imagined–optimistically and incorrectly–that I had helped to synthesize a new element. I would never have guessed that it was because I’d written poetry: specifically, a set of 119 haiku, one for each element of the periodic table.

I was born and raised in London, England, where people specialized early. For my last two years of high school, I studied mathematics, physics, and chemistry. No history, no English, no foreign languages, no art, no biology. Continuing in the same vein, I studied first mathematics and then computer science at Cambridge University. My closest approach to being an astronaut came when I did a M.Sc. in astronautics and space engineering at Cranfield University.

Soon after that life took a left turn. I moved to Boston, Massachusetts. There the Gulf War delayed the issuing of my work permit. With time on my hands, I started writing. Once I’d started, I didn’t want to stop. I wrote science fiction and fantasy, the kind of stories I had loved (and still love).

At its best, writing fiction is intoxicating. And when writing science fiction and fantasy, there are almost no limits to your imagination. You can create not only any character that you like, but any world for them to inhabit: dragons, or starships, or dragons captaining starships.

For years, I delighted in that freedom. Then, with the birth of my children, time became a constraint. I switched from writing stories to writing poems, because I could complete them more quickly. One day in December 2016, with my children at school, I wrote a haiku about hydrogen.

Where the inspiration for that first haiku sprang from, I don’t know, a chance idea that floated into my mind, that I played with until it fit the 5-7-5 syllable pattern. But I remembered my high school chemistry classes, and how hydrogen, the first element in the periodic table, is followed by helium, lithium, beryllium, boron, carbon … one after the other in order of increasing atomic number. And so I went on to write haiku for each element in turn. 118 elements, 118 haiku, plus a bonus haiku for ununennium, element 119, not yet synthesized. Most days I wrote a single haiku, interspersed with my other writing, so that the journey through the periodic table took months.

Writing, for me, is a mixture of happenstance and choice. Ideas occur to me unpredictably, but I choose which ones to work on. Because I had loved chemistry classes, because I love the idea of the periodic table, I wanted to complete the set of elemental haiku.

Near the beginning of the periodic table, the elements were familiar. Often I could draw on bits and pieces that I already knew. For instance, the second haiku, for helium, grew out of reading Steven Weinberg’s book, “The First Three Minutes,” in 1994. In the book, he describes the start of the universe, including how helium was formed. I combined that with knowledge from high school chemistry: helium is the first of the noble gases, and hence very unreactive.

In writing poetry, even poetry as short as haiku, combining two disparate ideas can be serendipitous.

The helium haiku also reflects my fondness for both astronomy and anthropomorphization. Many of the haiku imagine the elements as if they had personalities, such as potassium yearning for the halogens, or germanium wistfully wishing for a crown stolen by silicon.

As I progressed through the periodic table, more of the haiku required research. Needing facts to feed my imagination, I dipped into books about the periodic table, browsed the internet, consulted textbooks and encyclopedias. For instance, the haiku for lutetium references a phenomenon I hadn’t previously known about–the lanthanide contraction–which makes lutetium’s atoms and ions smaller than they would otherwise be. I combined that newly-learned fact with the popular image of helicopter parents hovering over their children:

Helicopter dad,
keeping your electrons close
to your nucleus.

While some haiku were quick to write, many took hours. I sat with my cats lying on top of me, trying to distill elements into seventeen syllables. (My cats are excellent muses, providing quiet background company while I think.) Part of the difficulty lay in balancing the haiku collection. I wanted a variety: the whimsical alongside the weighty, chemistry beside astronomy, history as well as biology.

After I reached the end of the periodic table, I submitted the haiku to Science, who published them in August 2017. Very recently, the haiku have been reprinted in a book, Elemental Haiku , from Ten Speed Press. For the book, I added brief explanatory notes for those curious about the underpinnings of the haiku. There was one extra addition which delighted me: Iris Gottlieb drew beautiful illustrations. It’s a complete delight to have her pictures alongside my words.

The best part of having the haiku published is hearing from people who’ve enjoyed them, some of whom have been inspired to write their own seventeen-syllable takes on the periodic table. I grew up studying science, then found myself, years later, writing poetry. The elemental haiku lie at the intersection of the two, a place I’d never imagined myself, but which I’m glad to have found.

2 thoughts on “At The Intersection of Science And Poetry”