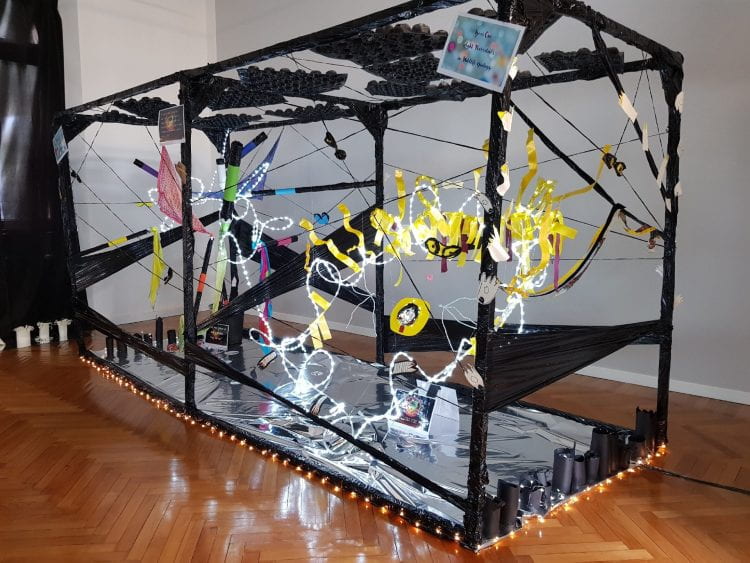 By Holly BF Warren (Atelierista and creator of the Think Tank)

This project revolves around the creative versatility of students across age groups, from nursery (2 years old) to Year 10 (15 years old) and across two schools. The early years created light installations and the middle and senior years used these installations as inspiration for creative writing. It shares the processes and dialogues that were created when an old flexi tube was presented to students, leaving all possibilities open to unlock their imaginations. In the middle and senior years, the students, guided by their teachers, were inspired to produce a piece of creative writing.

When imagination allows us to leap into infinite possibilities, an open-ended experience begins. Kieran Egan (2018) has conceptualised imagination as the connection point for perception, memory, idea generation, emotion and metaphor. Egan’s theories are evidenced in the Light Narratives’ focus on students’ multi-perspectives across the ages. 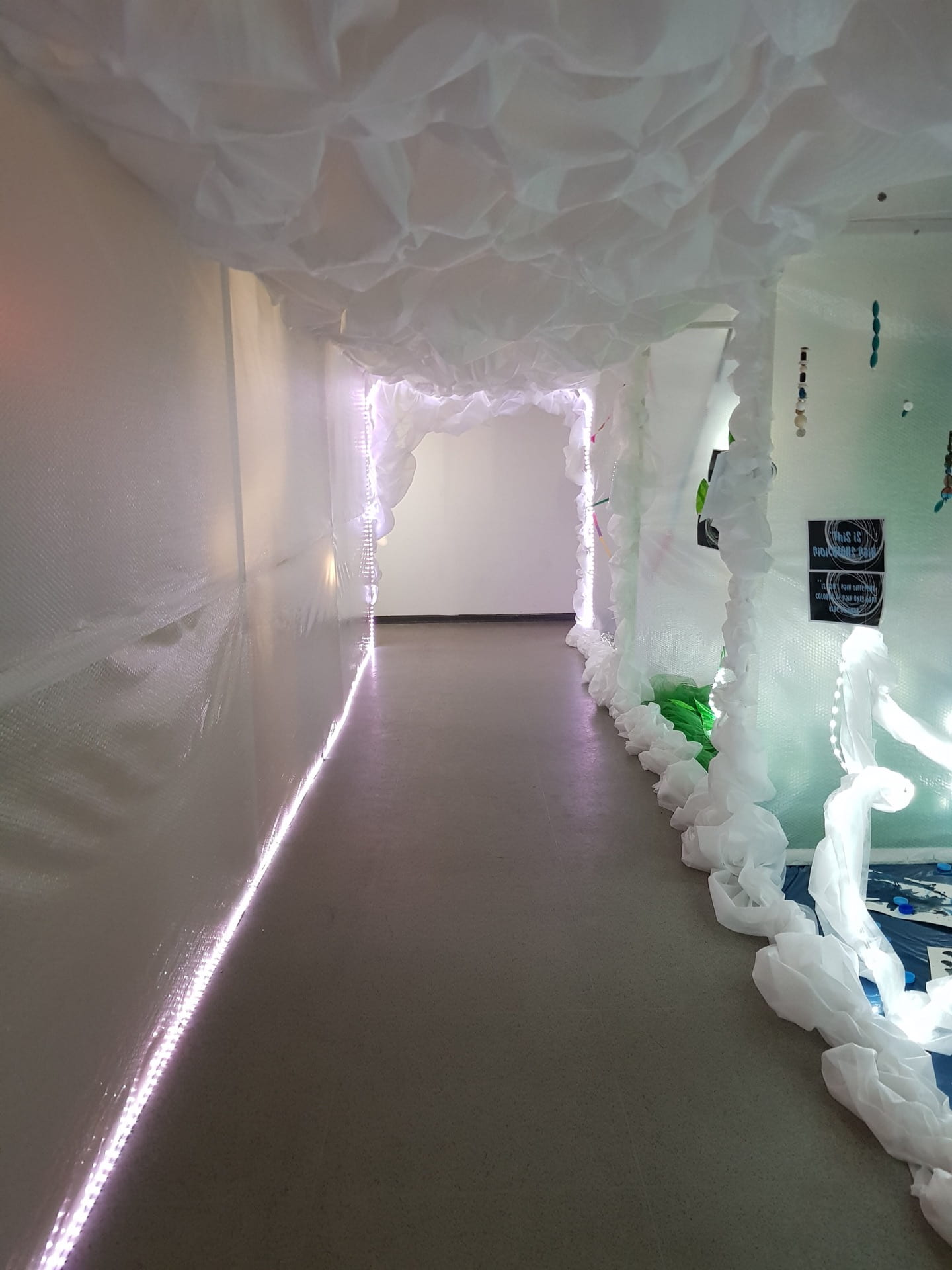 Imagination allows us to go further afield, opening a door to the apparently impossible which becomes achievable in what Margaret Boden (Boden, 2004 p.6) names ‘conceptual spaces.’

The setting for the research project was an Atelier inspired environment created and kindled by the Reggio Emilia Educational approach but has now found its home in the Think Tank, described by students as, “the place where ideas come true.”

This environment welcomes a multitude of expressional processes where the goal is to embrace and nourish the uniqueness and imaginative processes that individuals can bring onto a collaborative project, which flows and grows towards a common destination.

By combining possibility and imagination, a quantum leap can be made towards unrevealed creations that initiate in the mind and come alive in the making.  R. Ewing (2010) states that all artforms are disciplines with distinctive knowledges, skills and understandings and are different ways of making and representing meaning – different kinds of literacies.

It started when the old flexi light that apparently was at the end of its life experienced new beginnings. John Berger’s (BBC, 1983) statement that “stories begin at their end” still holds strong, where a narrative end in order to act as a trampoline for new experiences.  In this case, the possibilities granted to the old light was that of potential new beginnings that apparently were not yet seen. Here the power of imagination was fundamental. 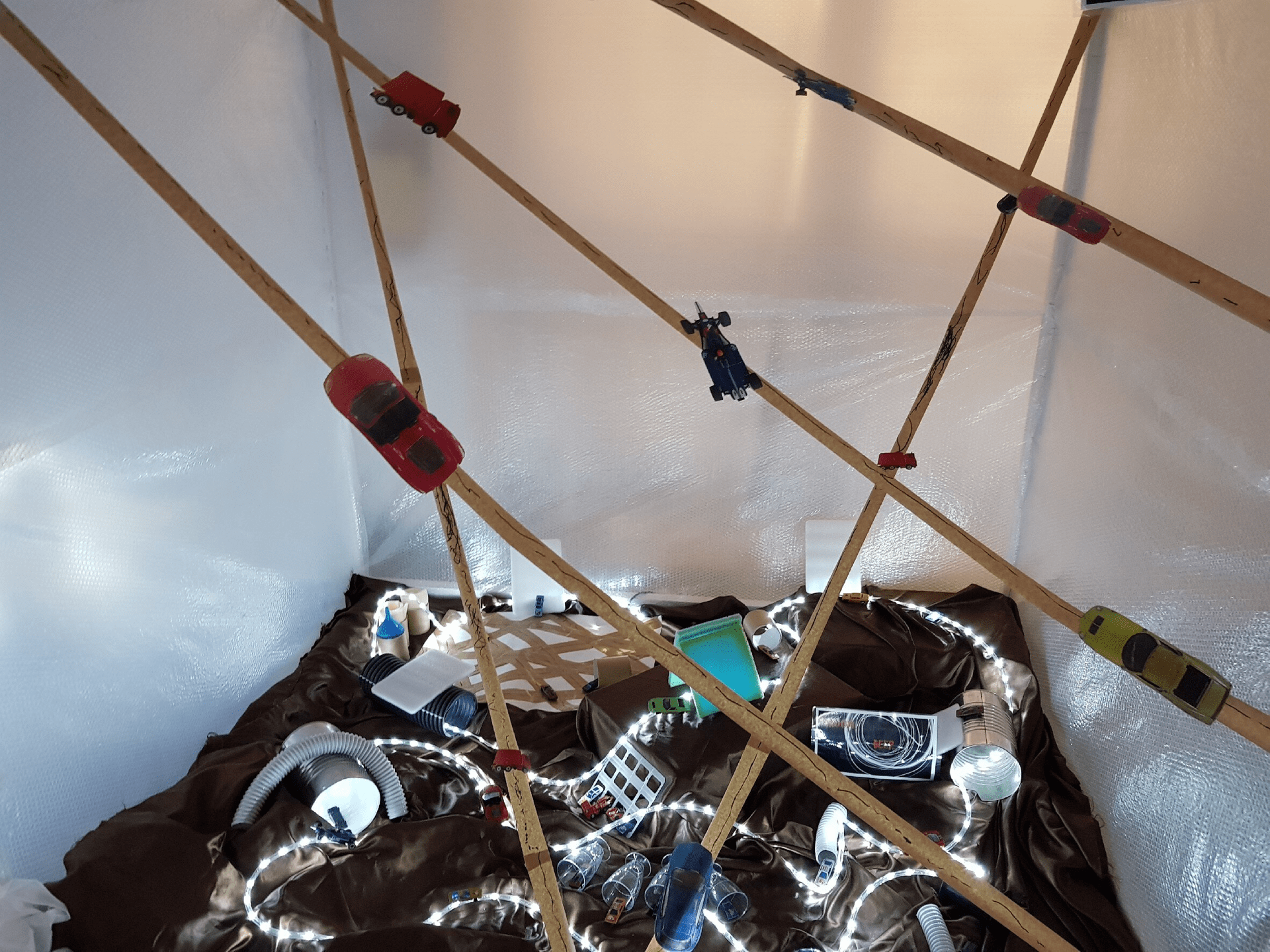 The atelierista presented the lights and played with the light effects, the students commented on the light flow and how it was “as fast as a fast car.” It immediately clicked that it was a road. So off went the vrooms and zooms and crash! 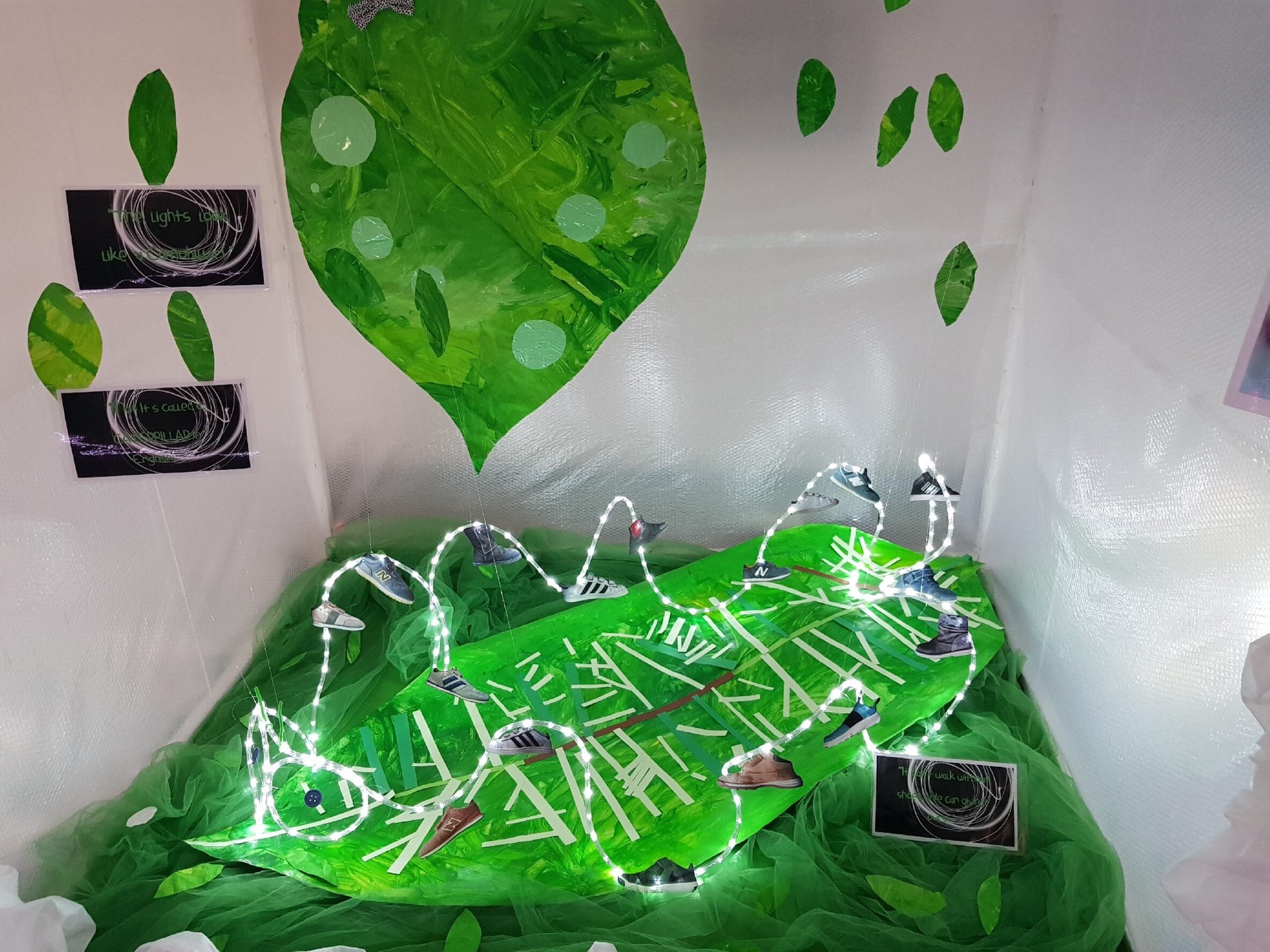 Experimenting with the potential expression of the light tube took a while and it went through phases of quiet observation, testing of flexibility and physical imitation and landed on the common idea of a caterpillar, which was, renamed CAMOBILLAR. A hairy, attentive athletic creature that wears fashionable items. The caterpillar idea emerged from the flexibility of the tube and the noticeable light effects that “look like the lights are walking and running.” 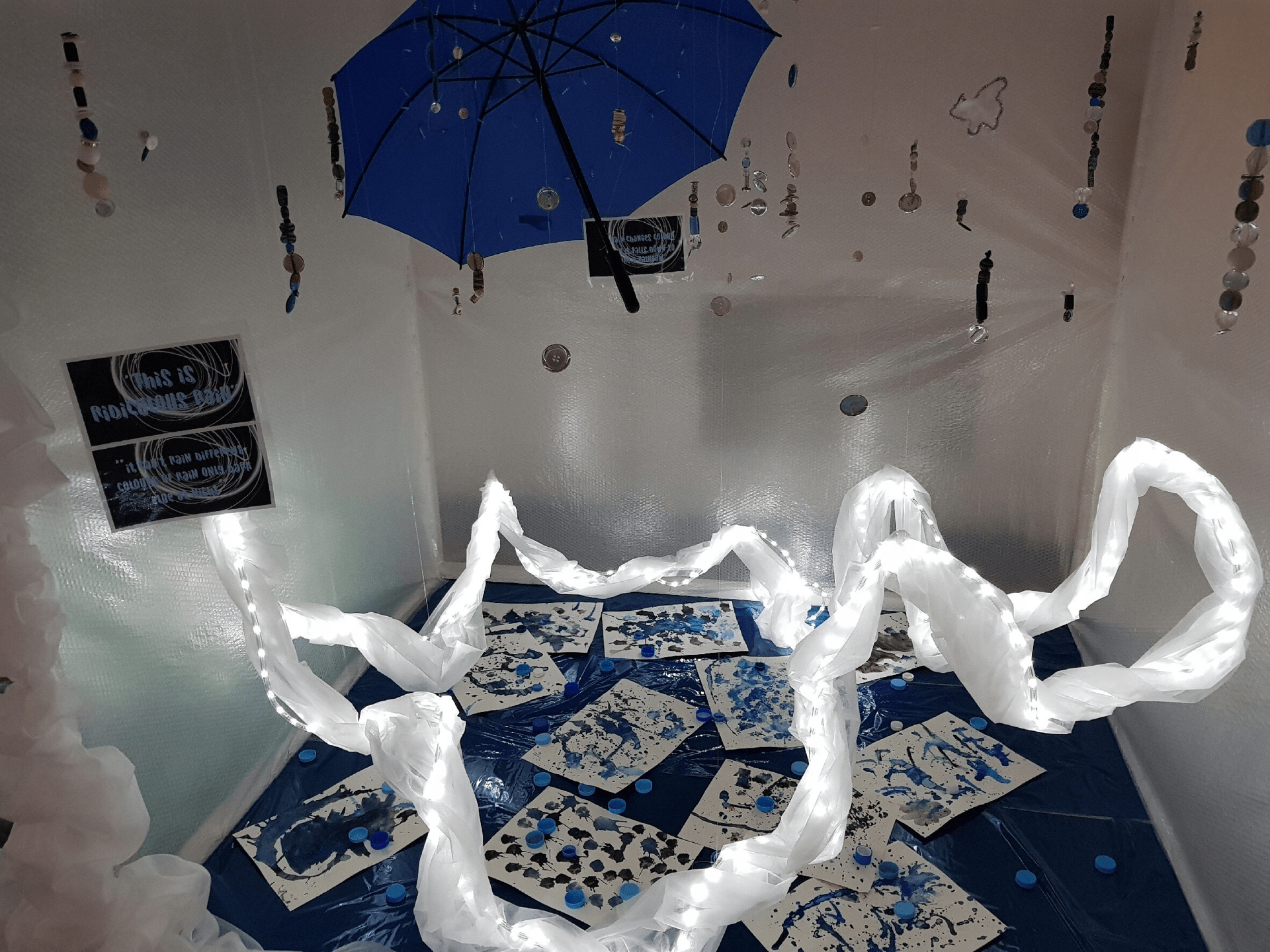 The children’s immediate response was that it was as vast as the sky and the lights were like stars. The stars then led to rain and a cloud was made with the tube and raindrops hung in the starry sky. 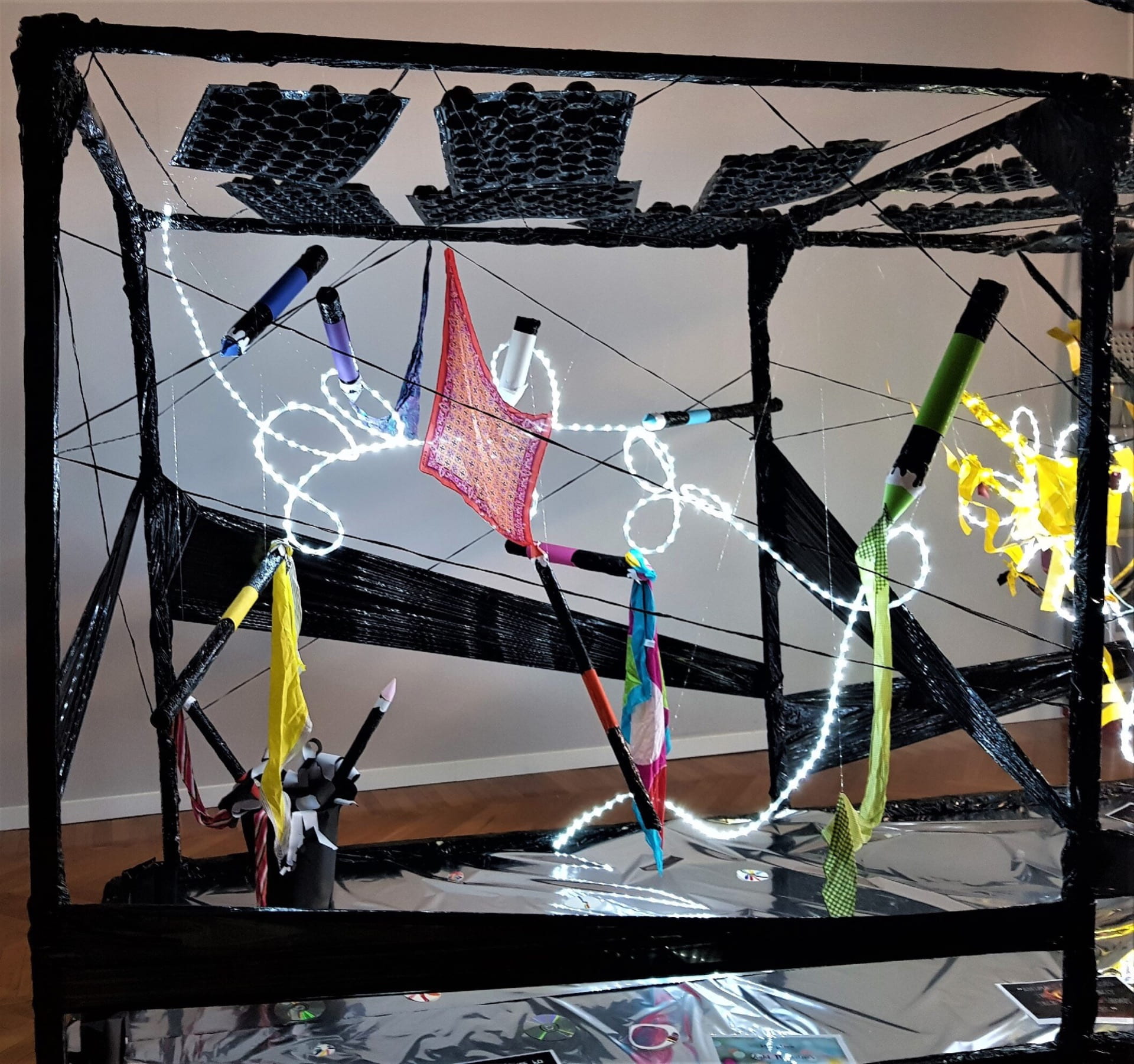 The children saw the string of lights as a “rope, like the ones we see at Christmas” although Christmas was over, they let their minds wander in a maze of amazement and questions. They expressed their scepticism in seeing it differently. “It is difficult to make a string of lights into a … picture! It is not like a pencil it looks like a scribble!” And the scribble appeared. 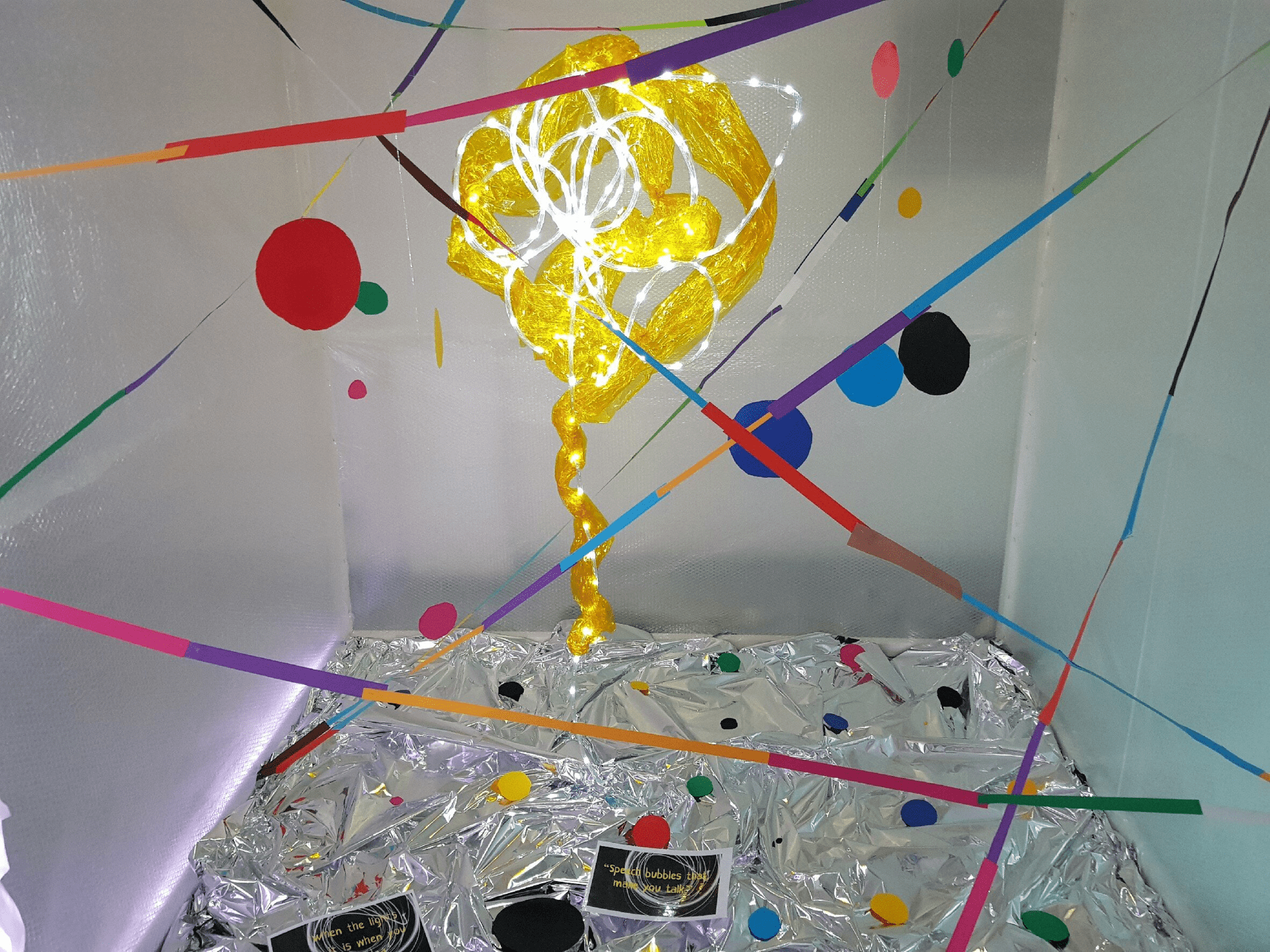 The lights became a significant concept in the theme “the brain” which had arisen in the Atelier/Think Tank and was greatly discussed with passion, enthusiasm and insight. It became a process of detailed inquiry. The students noticed that the lights could explain the functions of the brain as their flow changed. Three light effects became important in their interpretation of what happens when the brain “thinks.” The brain was the set in a scenario of thought connections seen as lines and circles. 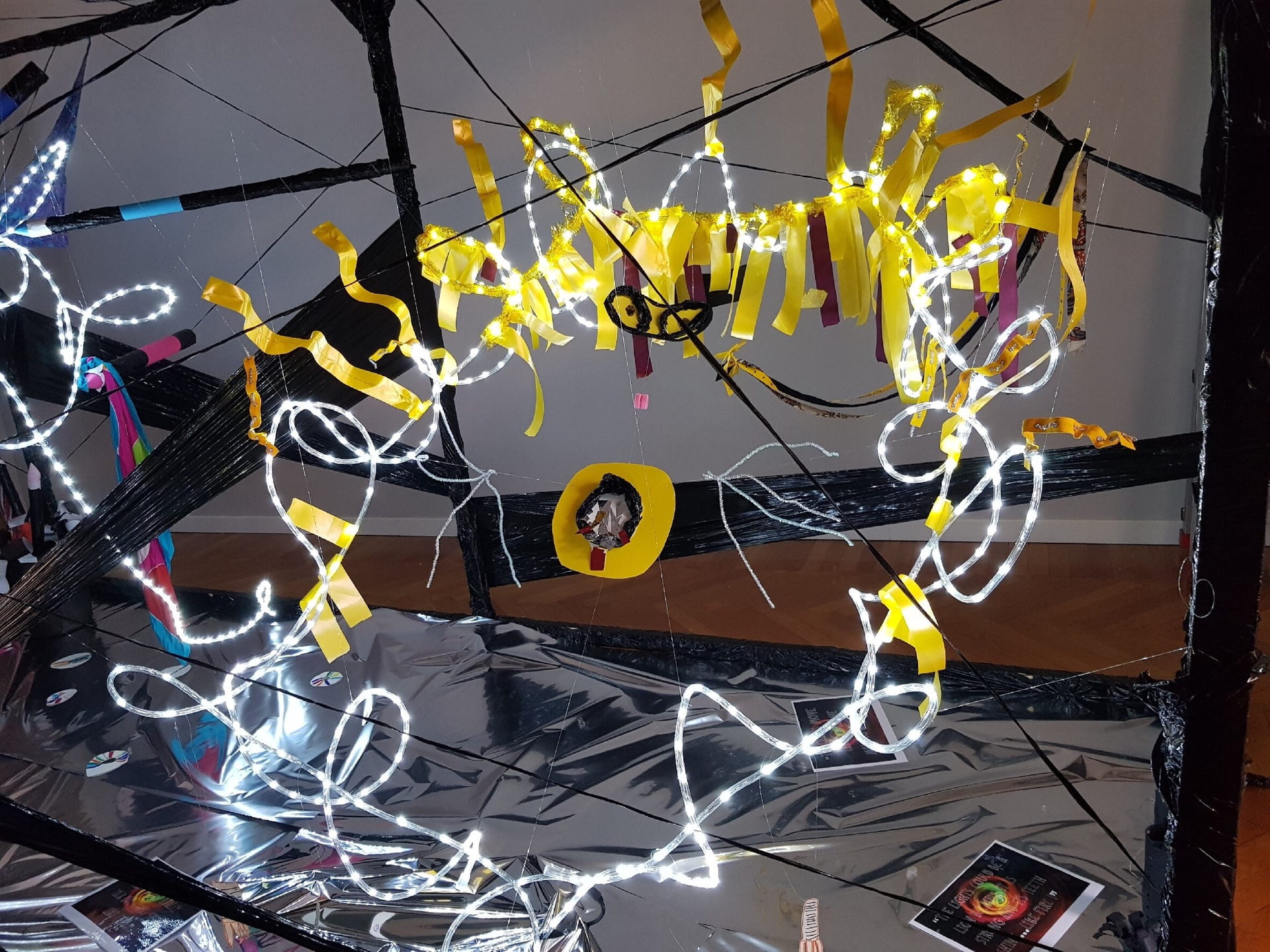 The lights inspired energy and movement and the children’s thought jumped on animals. The lion gave the best outline. “A lion is strong and its teeth shine…like fire.” Light was fire to them. The outline became a roaring lion in action.

The students’ work came together in the annual art exhibition. The installations were exhibited as they were seen in the students’ minds, alive and full of expression. It was staged for the viewer/audience to step inside the students’ imagination, so a structure was created in order to draw the audience into the child’s imaginative mind.

Sharing the Project with the Middle and Senior Years

Students from the middle and senior years came to see the exhibition and were in awe. They expressed their delight and surprise in the younger students’ ability to see beyond conventions, creating scenarios that brought the viewer into a dimension of imagination and fantasy that they seemed to have left behind.

The most used word by the students was amazing. Other words that emerged were unexpected, creative, different, moving, special, unique, floating into space, imagination and inspirational.

Many students commented that they recalled their early years “when we could use our mind creatively and our imagination was wild.” Children are so imaginative and free to express their ideas in many ways. However, a common misconception arises when people think and believe that creativity is mostly wrapped around childhood. This is not the case. As the students walked around the installations, their imaginations were awoken and were stirred by awe and courage.

As the teachers encouraged the students to use the installation for further thoughts and considerations, they were surprised and inspired too. A chain of imagination and inspiration had only just begun for all age groups involved!

This approach to learning and knowledge can be seen as philosophy described by Adam Ferner (Ferner, 2018, p.132) “to be constantly questioning your position and testing out different perspectives.” The mind is truly magnificent.

BBC. (1983). John Berger and Susan Sontag To Tell A Story [Video]. Retrieved from 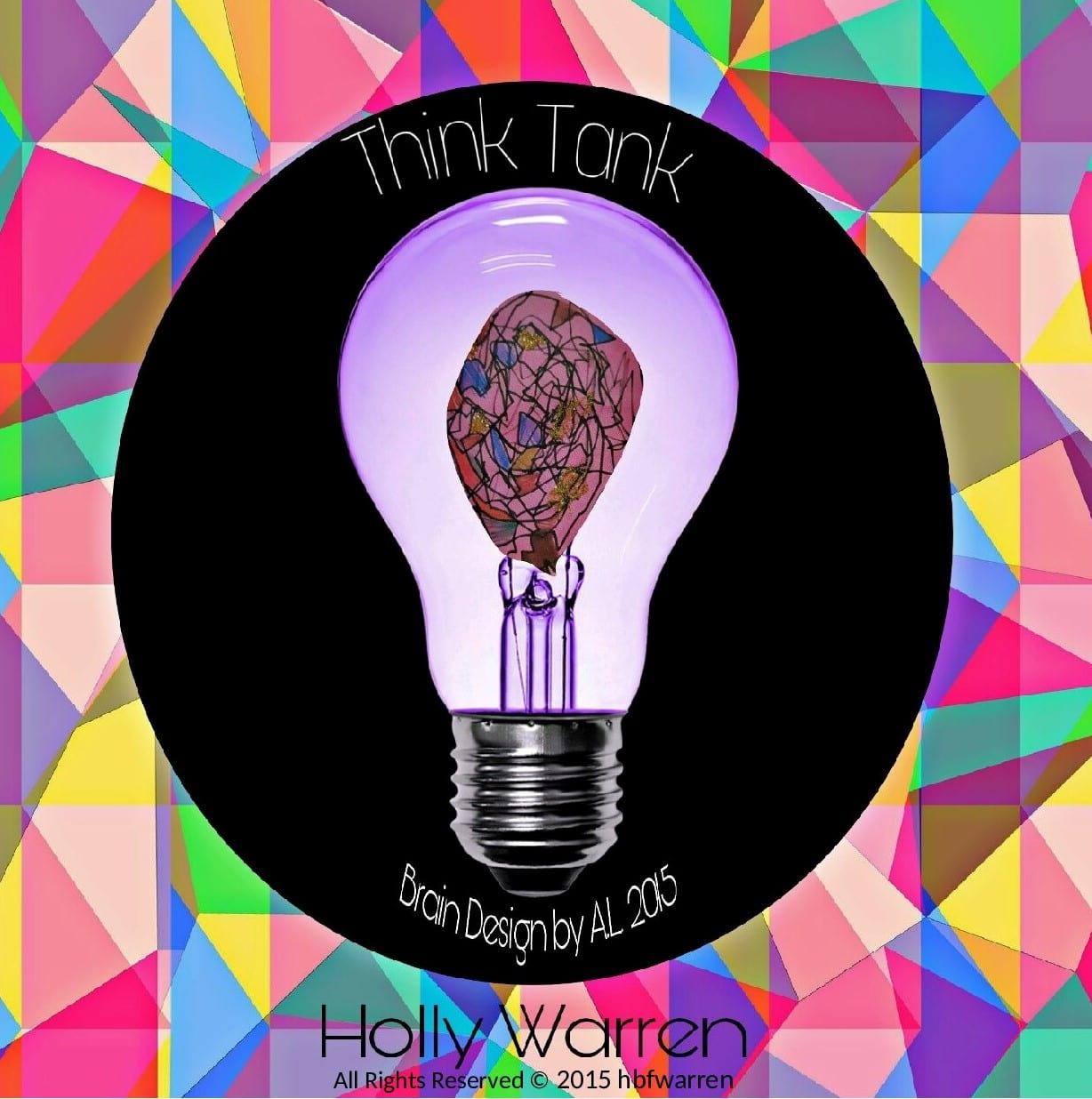